When I decided I wanted a French bulldog during the summer of 2010 I had a hard time convincing my (then) boyfriend, Paul.  He was set on a big dog, like a Lab.  He felt that a French bulldog would be a small yappy dog. I researched online and found a few breeders in Phoenix but they just didn’t have the look of the cute puppies I was searching for. In May 2010 I found DesertBulldogs.com who had just had a litter of four pups.  I fell in love with the pictures so I called and spoke to Holly and made arrangements to visit.  It was love at first site, but I still had to convince Paul.  I talked him into going to Holly’s with me for a second visit. By then there were only two puppies available, a black brindle and a cream female.  As soon as we put the little male in Paul’s arms there was no going back-it was love at first sight and we were both determined to bring home our little Frenchie, Angus.  Angus has been such a joy to us. He is beautiful, healthy, smart, and has an amazing gentle disposition (we have cats and we have never had an issue with him and the cats). We loved having Angus so much that we went back to Holly and Desert Bulldogs a year later for our 2
nd puppy, Bella. Bella is a beautiful black brindle female and she and Angus are inseparable and the best of friends. She is a beautiful, healthy, loving, playful little girl and she truly completes our family.  We are so happy we found Desert Bulldogs and would recommend them to anyone looking for the perfect companion to complete their family!
Michelle & Paul Lottner 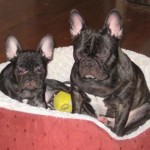 We love our baby.     Holly made her transition to us such a smooth one.    We would do it again when we are ready to have another puppy.       I know that Aimee would love to have a little brother one of these days.       Holly, we will be back.
Ben & Marie Walburg 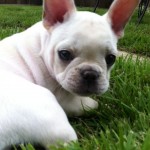 Holly is a great person who brings her concern and love of her dogs into the breeding process.  Because he was the only one in his mama, Bella’s first litter, Sampson was able to get all of the attention from her and from Holly.  Sampson has been a wonderful addition to my furbaby family, and it is not only because of his disposition, but mostly because Holly was able to take the time to train him at a very young age.  I cannot wait to see what qualities he has inherited from his parents, Bella and Bazi, and from his grandparents, Cha Cha and Tango.  Thank you Holly for allowing Sampson to choose me, he has been a wonderful gift to me.
Tanya Rivera 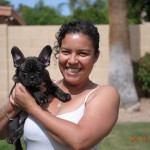 I cannot say enough wonderful things about Holly and Desert Bulldogs. When I first started my search I reached out to several other local breeders but for one reason or another decided against all of them. Then I spoke with Holly and immediately had a good feeling about not only her but the quality and care she put into her breeding. Once the puppies were four weeks old I was able to meet them. I immediately fell in love with Henry – over the next four weeks I was able to visit him weekly. This was such a great opportunity for Henry and I to bond but also to hear training tips from Holly. At 8 weeks I took my little man home and it was such smooth transition. Holly was there every step of the way checking in and there to help answer any questions I would absolutely recommend Desert Bulldogs to anyone looking for a french bulldog – you won’t regret it!
Jen Hendrick 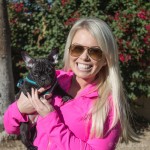